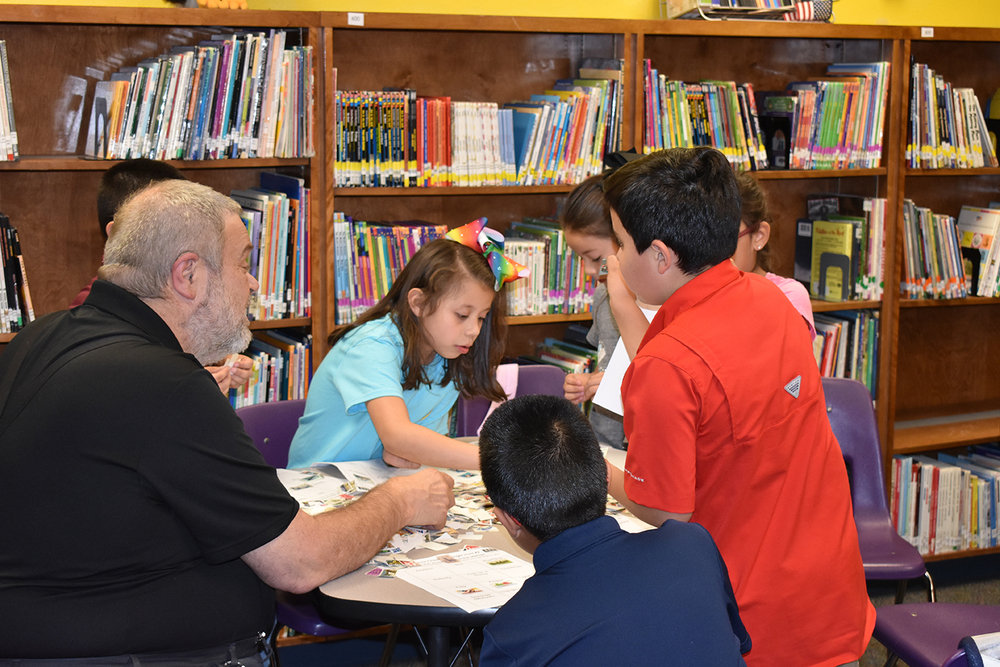 The second and third-grade students at Morton Elementary discovered a new way to learn about the world.  Thanks to Mr. Hill from the high school, the students have started a new after-school stamp club.

“It’s a wonderful way for kids to learn about the world around them,” Hill said.  “They get to see stamps from many countries covering many people, places and things.”

The club started two weeks ago with about 10 students.  They had a lot of fun learning about stamps and how to mount them on an Album page.  Hill said they were very excited.

“Apparently, the word got out to the others, and the second week there were over 20 kids,” Hill said.  “They had so much fun doing a stamp collecting version of visiting the zoo.”

Hill tries to incorporate lessons in the stamp club meetings, so the kids are learning about science, history, languages, art and other things while they are having fun.

“Last week we visited the zoo through stamps,” Hill said.  The kids had clues about certain zoo animals, and they had to decide various things about that animal, based on those clues, then find and mount the stamps with that animal on it.”

The stamp club was an idea that Hill had last year to get some elementary kids involved in an after-school program.  He has been a stamp collector since he was 7 years old, so he wanted to start with kids the same age.

“I began collecting stamps when I was in 2nd grade and was so fascinated to see those bits of paper from other countries,” Hill said.  “I remember being particularly excited about seeing stamps from Russia.”

The stamp club has gotten support from several national stamp-collector organizations and other stamp collectors that Hill knows.  They have sent lessons, album pages, supplies and many thousands of stamps for the Morton students.

“I was once a stamp dealer on Ebay, and I have a lot of stamps myself,” Hill said. “But when I reached out to my collector groups, the outpouring of donations really surprised me.”

With the stamp club off and running now, Elementary principal Rina Ramos would like to see some other after-school clubs get started in Morton.

“I think we could set up some programs for our kids to be involved with educational activities, like the stamp club, to give them some fun things to be involved in after school,” Ramos said.

The Morton Stamp Club meets in the Elementary School Library every Tuesday from 4:00 p.m. to 4:45 p.m.  There is a need for adult volunteers to assist since the club is growing so rapidly.  For more information on how you can get involved, contact Mr. Hill at 806-266-5505 Ext. 507 or at Russell.hill@morotnisd.net.