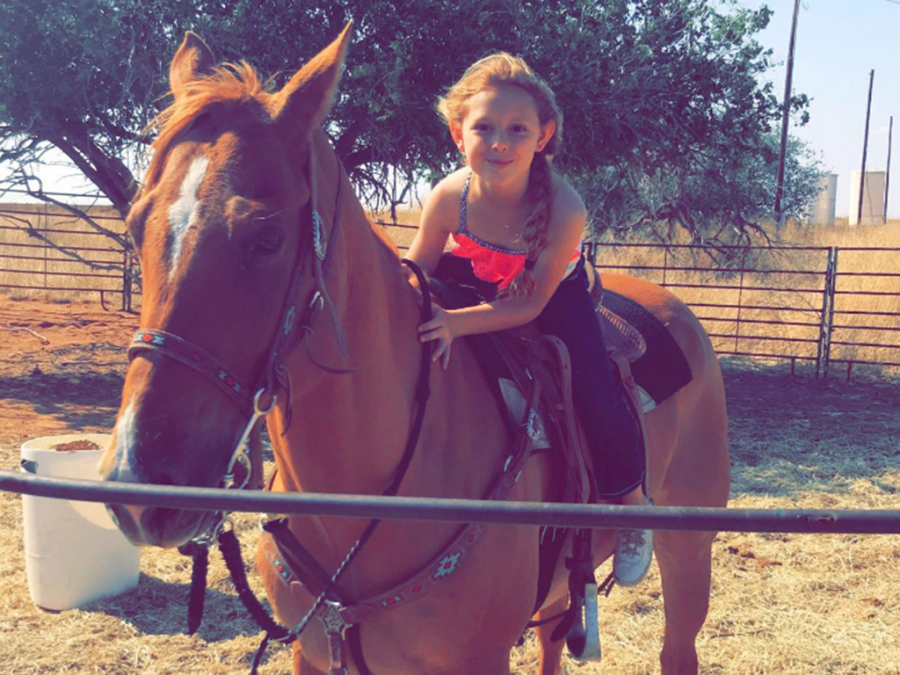 Talitha Silvas loves to ride horses. In the rodeo.

Talitha decided about a year ago that she would like to train to ride in the rodeo after her trainer urged her to get into competition.  Talitha’s mom, Shiloh Coffman, supported this decision because she enjoys riding too. Loryn Lyon, family friend and trainer, allowed Talitha to begin training on her horse, Royce.

Horses and riders that compete in the barrel racing, pole or flag competitions must ride in a pattern. Lyon led Talitha on a horse to teach Talitha the pattern and help her get into the rhythm of what she needs to do.

“Points are deducted if we get off the pattern or if we are beaten by another contestant’s speed,“ Talitha said, “We need to be on pattern and FAST!”  She drew the three-leaf clover pattern that she and her horse must follow to illustrate what she has to do.

Riders earn points in the competitions that qualify them to compete in bigger events. Events occur throughout the summer in Morton, and occur at different times in Muleshoe, Levelland, Lubbock, Midland and at Texas Tech,.

After several months of training Talitha’s mom bought her a horse named Chico. Chico is a playday horse, which Talitha explains, “means he knows a little bit of everything”. Part of the training involves “finishing” Chico so he knows how to compete.

Talitha took part in Cowboy Church, an event where her horse ‘ran’ with her for the first time. Talitha remained calm and was able to get her horse back under control. Talitha’s mom said that episode changed Talitha’s thinking.

“Talitha was fearless until then. Now she is a little more cautious.” Ms. Coffman said. “Riding is a real sport. It takes guiding using legs, voice, reins and hands; strength, and eye coordination.”

Ms. Coffman and Ms. Lyon both said that Talitha, “is doing really well”. She ran the barrels in 25:28 and tagged a goat in 15 seconds. Talitha is also able to “lead rope” or lead other horses and riders through the barrels. She said that fees and the travel expenses make it difficult to compete in everything but Talitha is gaining experience to help her compete well at more difficult events. She said she plans to take part in horse shows as part of the training. Horse shows are judged based upon structure, gait, smooth transitions between gaits, stopping from a full run, and responding correctly to orders.

Talitha said that having a horse is a big responsibility, she must visit and feed her horse at lunch and dinner, play with him and ride him. She said she has won belt buckles, a hay hangar, a feed bucket, and a MYRs jacket that her mom wears because it was too big for her. She doesn’t mind the responsibility because she loves what she is doing.

Ms. Lyon is open to eventually training other riders and said that they do not have to own their own horse, though that would be best. She said she enjoys training horses and riders and, ‘wants it to be in her life’.