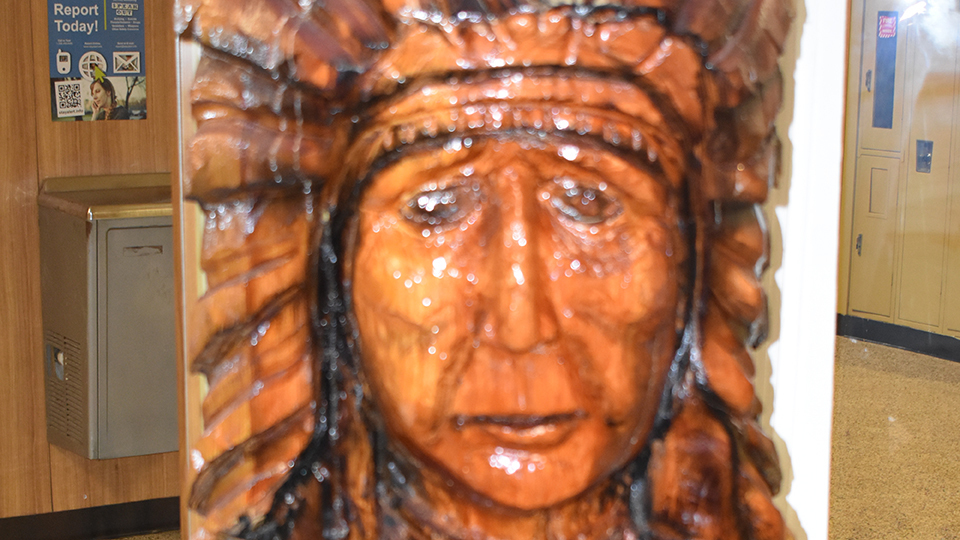 Creating works of art from downed tress is not a common skill.  The ability to turn the damage effects of a storm into a work of art is something to be admired.  And we have an example of that kind of art right here at Morton High School.

Cam Dockrey lives in Whitharral and is the owner of Bearly Making It Chainsaw Carving.  He began his business in 2000 by working in a small barn behind his house, but as the business and reputation grew, he moved into a cotton gin.  Cam’s business is the largest chainsaw carving company in West Texas.

“I have done carvings in every state except Vermont,” Dockrey said.  “I have even done some carvings in England and Australia.”

A big storm in 2010 brought Dockrey to Morton.  Several large trees were downed in the storm.  Dockrey was commissioned to carve one of the trees for the court house square.  At the time, another carving was made for the Morton High School Library.  This is the large Indian reading a book in the Library now.

“The County had several trees that went down in that storm,” Dockrey said.  “We made a deal that I would carve the Courthouse sculpture and the Library sculpture and I could have all of the trees from that storm.”

For Homecoming 2019, the Morton Student Council would like to have the community decide on an appropriate name for the Library Indian.  The poll to vote on the name is located on The Tribe website.  Voting will continue through 3 p.m. on September 27.  Results will be announced at the Homecoming Game at night.

Dockrey has done a number of different carvings in the West Texas area.  Most are the result of storms, drought or redesign of an area.

Some recent projects include:

For more information about Bearly Making It Chainsaw Carvings and Cam Dockrey, visit his website at www.texassaw.com